This category aims to provide guidance for when to purchase, what to purchase, and where to place your wagons, as well as other strategic guidance you might need to know.

You should save up as many bolts at the beginning as possible and not spend them until Dynamite appears. If you have accumulated at least 7 bolts and the cart selection is not in your favor, you may purchase upgrades for the Crafter, Storage and Tank, keeping in mind that you can earn up to 3 bolts per level. See the picture below for wagon placement.

The world record for distance swaps the positions of the Tank and Crafter wagons with two Dynamite Wagons near the back, in front of the Tank. There are a few reasons for this: ideally, your tank of water will not need to be filled or extinguished as often as you will need to pull tracks off and place them. The tank of water can also be refilled from the engine making its default position redundant. You want a rearward water reserve allowing it to be refilled from either end of the train and your tracks as far forward as possible to allow the designated track layer to easily pull tracks off whilst refilling the Storage. Also, running to the rear of the train to pickup tracks is very inefficient and could possibly derail the train at high speeds if you have not placed enough tracks ahead. You can swap wagons around as early as the completion of the first station. While in the shop, simply pickup the Tank and drop it in place of the Crafter. 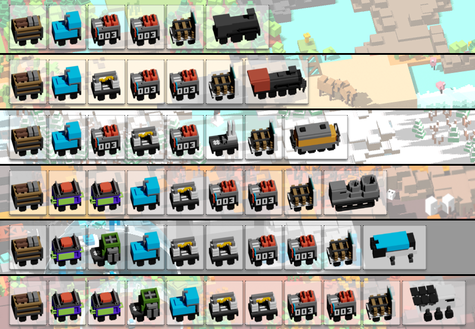 When do you buy that engine upgrade? Well, if you have an experienced team, you can push to 600-700m fairly safely in the first biome. With that said, the world record pushes it to double that on Easy and over 1000m on Hard. Ideally, you want to avoid buying a new engine until the train is going too fast for your team. That will vary based on your team's experience level of course. You should be trying to push the speed as high as possible and feel comfortable playing at around 0.650m/s.

Something to keep in mind when avoiding engine upgrades for a long time is that you don't have to care about missions or the hidden bolts in the map. For example, if you're pushing really far into the first grassland biome, you will have more bolts than you can even use. So once you have your train maxed out for the first biome, don't waste time on difficult missions or hidden bolts on the map.

This category attempts to share insights and tips on efficient routing.

When mining a path through resources for the train, it is helpful to ensure that the entire cleared route is at least 2 spaces in width so that players can move alongside the train without a bottleneck. If time allows, increasing the width to 3 spaces will allow multiple players to move back and forth instead of having to take turns. You want to always cut 4 squares in before placing dynamite to get maximum efficiency of a tier-3 TNT explosion.

It is important to designate a single person to lay tracks because two people can't lay tracks at the same time without causing the tracks to be double-placed and possibly derailing the train. The ideal team consists of three players: one miner, one track-layer, and one resource gatherer/dynamite user. The players can multitask but, as the train gains speed, they must focus on their own tasks. To increase efficiency, the designated track layer should pick up resources immediately after placing tracks and return to the train, deposit the resources, and pick up tracks again, and continue this sequence.