The buckinator wagon is a dock that charges the bucket and gives it special powers. To charge the bucket it needs to be picked up and placed into the Buckinator. A charged bucket can empower players' characters, supercharge dynamite and quickly melt snow in the Snow Biome. A charged bucket's effects work on any player within radius of the ring. However, the bucket's charge starts depleting once removed from the Buckinator (undocked) and eventually becomes a regular bucket unless recharged by again placing it into the Buckinator. If the bucket is docked while the train crosses a body of water, the bucket is instantly filled with water if not already full. 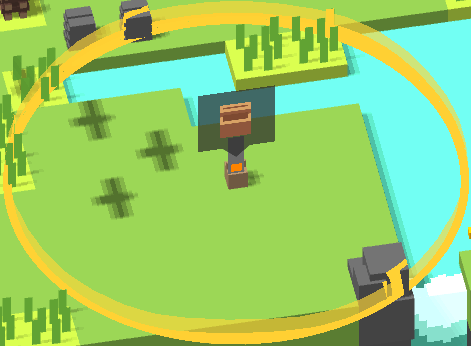 Empowered players' characters can chop and mine in one hit and pick up 12 resources at once mimicking the Milk Wagon Cow and Camel milk effects. The empowered effects persist as long as the empowered character is within range of the charged bucket. Once the empowered effects end, default resource harvesting speed and carrying capacity take over. This means that if an empowered player character is carrying 12 resources, but moves outside the charged bucket's range, they automatically drops nine resources to the nearest available spot when possible and continues carrying the default three resources.